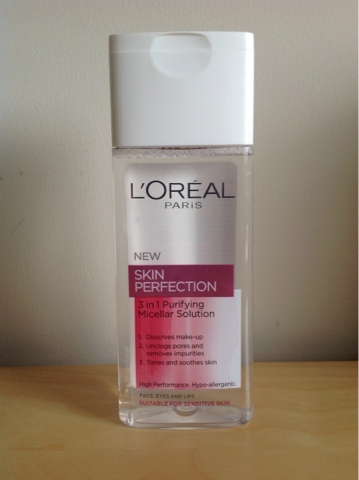 A possible dupe for Bioderma? That was my question as I saw the newly launched L’Oreal Skin Perfection 3 in 1 Purifying Micellar Solution on the shelves of my local Sainsbury’s whilst doing my weekly shop. At £4.49 for 200ml, I thought I may as well give it a go as it was a fair bit cheaper than some of the other dupes by the likes of Avene and La Roche Posay to name but a few.

Already being used backstage at London Fashion Week, this claims to dissolve make-up, unclog pores and remove impurities as well as toning and smoothing skin, so how did it do I hear you ask?

As I always double cleanse my face, I simply use this as my first step in removing my make-up before going on with my favourite cleanser of the moment. Firstly I removed my eye make up and I have to say that it did a very good job, would probably go as far as to say it was slightly better than Bioderma (shock horror!). After holding the cotton pad to my eyelid for a few seconds it was easily wiped away without any rubbing or pulling. I then removed my face make up which, again came off easily and did not break out my sensitive, acne-prone skin.

I am extremely pleased with the effectiveness of this product, obviously I can’t really comment on using it as a cleanser alone, but as a make-up remover it definitely did the job and would say that it was a great dupe for the iconic Bioderma and far more readily available and at a fraction of the price.