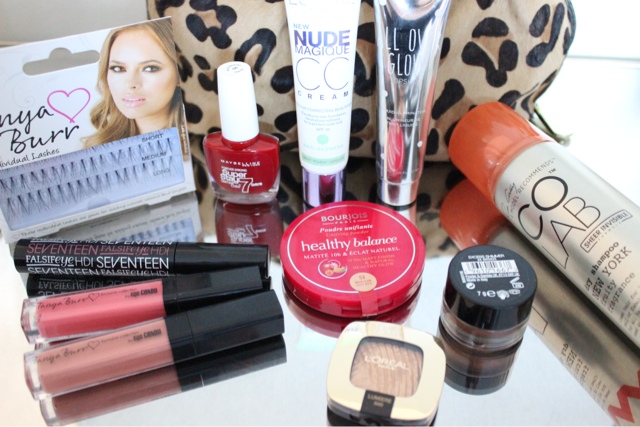 So not in a million years did I think a UK Beauty Haul would be featured on my blog! But now as I have to travel to the UK, I picked up a few things that are not available in the US, from Boots, Feel Unique and Topshop. I pretty much love everything that I bought, so this will give you a taste of some of the products that will feature on my upcoming posts.

Lets start with Feel Unique, which actually do ship to the US, however certain products are exempt from this such as the Colab Dry Shampoo which everyone is raving about so couldn’t not get it. I bought the scent ‘New York’ for obvious reasons which smells incredible! While I was there I picked up a couple of Tanya Burr Lip Glosses in the shades Picnic in the Park and Chic, which have been out of stock for a while now as they are two of Tanya’s favourites. Finally I bought a packet of her newly released Individual Lashes as I am going to be a bridesmaid at New Year for my friend and individual lashes are a more subtle way of getting extra voume without being too obvious.

When I visited Boots, they were having a 3 for 2 deal on so couldn’t resist getting a few things. They don’t sell Bourjois in the US, so I picked up the Healthy Balance Powder which I ran out of shortly after I arrived here. It is defnitely the best drugstore powder I have tried. Also from Bourjois (but not pictured) was the Rouge Edition Velvet Lipstick in Happy Nude Year, which I just couldn’t resist with that name! If you saw Tuesdays post, you would have heard me talk about the new Max Factor Excess Shimmer in Bronze, which I found to be a complete dupe for the limited edition Mac Paintpot in Eclair, its gorgeous! Another eyeshadow I picked up was the L’Oreal Color Riche L’Ombre Pure Eyeshadow in 500 Lumiere, which is a stunning gold shade which I thought would be perfect for the party season especially paired with a red lip. Also from L’Oreal, I got the Nude Magique CC Cream for redness correction and I have to say even though it is not tecnically a primer, it has to be one of the best priming products I have tried in a while, more on this to come! I forgot my nail polish when I went home so played it safe and went for a formula that I know and love, the Maybelline Forever Strong Super Stay Nail Polish in Deep Red as believe it or not they actually don’t sell this formulation in the US which saddens me as it is one of my favourites! Finally from Boots I bought the Seventeen Falsifeye HD Mascara purely on recommendation from Wayne Goss who said it was the best mascara he had tried from the drugstore and I completely trust his judgement so wanted to give this a go!

The final product I picked up was from Topshop when I was buying a new bobble hat, I saw the make-up counter and wanted to try-out the All Over Glow as I thought it might be a cheaper alternative of the Charlotte Tilbury Wonderglow that has been on my wishlist for ages. I am hoping it gives me a glowing complexion throughout the upcoming winter months!

I am really happy with my purchases and am looking forward to bringing you the lowdown on them soon!

Do you own any of these products?